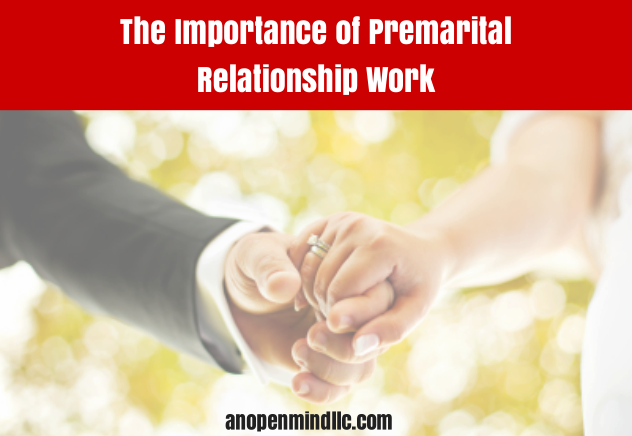 Why do couples do premarital relationship work and why is it so important?  In a lot of cases people just want to save $60 on their marriage license.  Some couples do it because the minister said they had to have it in order to marry them.  Some people want to know that they are prepared for marriage.  Some people realize they have issues that need to be fixed before walking down the aisle. In any case, premarital relationship work is always a good idea and it often becomes an eye-opening experience.  Premarital should not just focus on who the couple is now, but more so on who they could potentially become and the problems that could possibly arise over the years.  People are not meant to stay the same; change is inevitable, however, it is this change that causes so many problems in relationships.  One person goes one way and often times the other person goes the opposite direction.  Premarital relationship work should proactively address how to deal with these changes in the future in a healthy manner.  By having a plan for the future and being aware of possible issues, couples can deal with these things by communicating and working towards a solution instead of simply becoming resentful and becoming distant from one another.  Premarital work should address expectations of marriage, compatibility, communication, conflict resolution, intimacy, finances, and long term goals.  If all of these are addressed, couples can rest assured that they are prepared to go into the biggest decision of their lives.

Filed Under: Relationship Advice
← How do I keep my fiancé from ruining my financial status after we combine our finances?
Who Should Try Relationship Coaching? →